“Becoming a franchisee has been liberating” 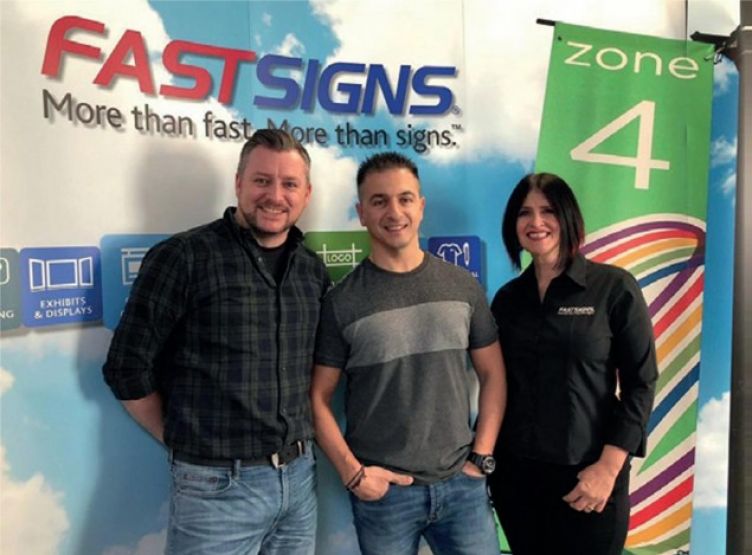 Melanie Martinez (Mel) has worked for FASTSIGNS for nearly 26 years, 24 of those as an employee at the company’s Crawley centre, where she helps local businesses showcase their services effectively through the use of signage.

Most recently, she’s spent nearly two years as the franchisee of the same centre.

Having left art college in 1994, Mel worked as a freelance artist until she and her husband, Jose Martinez, decided to buy a house.

In order to get a mortgage, Mel needed a steady income, so she joined FASTSIGNS, the same business her husband worked for. But she never intended for her employment to last any longer than was necessary to achieve their objective of home ownership!

Nevertheless, Mel formed a good working relationship with the then owner of FASTSIGNS Crawley, who gave her more and more responsibility. In 2010, when the franchisee decided to sell the business, Mel was given the opportunity to buy it.

However, having just become a mum, she didn’t feel the time was right and the franchise passed into new ownership. Mel continued to work for the business in a part-time role as she brought up her young family. In 2018, the franchisee of the centre decided to retire. This time, Mel knew she couldn’t miss her chance again.

Mel says: “I was the driving force behind wanting to buy the franchise. I knew I’d missed out on the earlier opportunity and wish I’d been braver back then. Knowing what I know now, franchising could have helped me create a positive work-life balance, but the timing just wasn’t right.”

During her time with FASTSIGNS, Mel has focused on nurturing relationships in her local area, helping business owners achieve their signage requirements and her exuberant personality has helped her to make lasting connections.

“When I was just an employee of the centre, I loved my job and loved helping businesses, but now it’s personal and I’m glad I was able to put the groundwork into developing relationships with my customers,” Mel says.

“We still deal with some of the businesses I worked with almost a quarter of a century ago, so I must have done something right.”

COURAGE OF MY CONVICTIONS

Mel has found becoming a franchisee liberating: “When I worked in the centre, I had so many ideas for how I would do things, but of course had to get permission from the franchisee. Now I have the courage of my own convictions and can press ahead with the changes I want to implement.”

One of Mel’s goals is to increase her business’ turnover and improve its positioning in the FASTSIGNS network league tables. To do this she’s invested in marketing and is already reaping the rewards.

Between 2018 and 2019, the Crawley centre grew by 35 per cent, which Mel sees as proof that she made the right decision, stepping out of her comfort zone and finally claiming the business as her own.