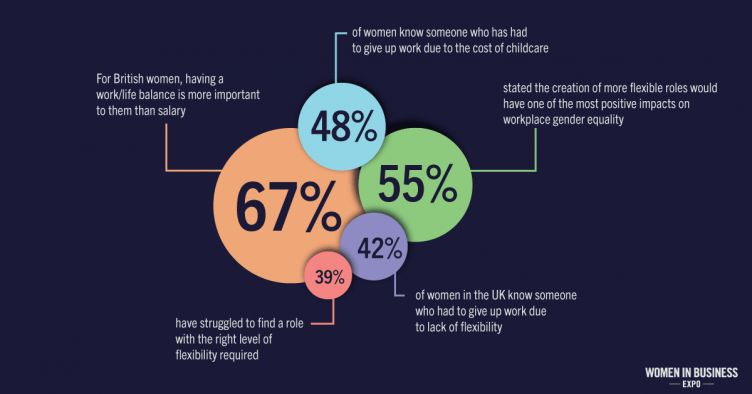 New research from the Women in Business Expo has found a lack of flexibility and issues with childcare are some of the biggest challenges women in the UK face in their careers. The research, which surveyed working women throughout the UK, found that 42 per cent of women know someone who has had to give up work due to a lack of flexible working options.

In fact, 40 per cent of British women state that the lack of flexible working options available has been the biggest challenge they have faced in their own careers, while 39 per cent have struggled to find a role with the right level of flexibility they require.

Juggling family and work commitments is still a big issue for working women in the UK. Just under half (48 per cent) of women know someone who has had to give up work due to the cost of childcare and 19 per cent have either denied or not mentioned to potential employers that they have or are planning to have children. In addition, 20 per cent of women surveyed stated they would have to take parental leave even though they earn more than their partner.

When asked what initiatives would have the most positive impact on workplace gender equality, 38 per cent called for greater support for paternity leave in the workplace, with 34 per cent stating that greater support needed to come from the government. However, it didn’t quite make the top spot in improvement initiatives, as over half of the women surveyed (55 per cent) stated the creation of more flexible roles would have one of the most positive impacts, and 42 per cent noted the simple ability to have a more open conversation regarding flexibility within roles.

Christie Day, group event director for Women in Business Expo said: “There’s been huge strides in workplace gender equality in the last couple of decades, but this research has shown there is still a long way to go before we achieve total gender parity.

A quarter of women still have issues with a gender pay gap in their workplace, and 16 per cent still experience everyday sexism. This is simply not good enough. Businesses leaders need to start taking greater responsibility for ensuring equality in the workplace beyond what is mandated by the government.

“Offering flexible working, for example, would not only benefit female employees with children but is something everyone would value.”

Launched by Hub Exhibitions, Women in Business Expo is a new free-to-attend event designed to provide an environment where women can learn, network and share experiences. The event will take place 16-17 October 2019 at Farnborough International Conference and Exhibition Centre, Hampshire.

It will provide attendees with a range of talks and access to leading companies, which will provide business, franchise and career opportunities along with support for future career moves.

Start your own CUPP franchise

Send a free enquiry to CUPP for further information!