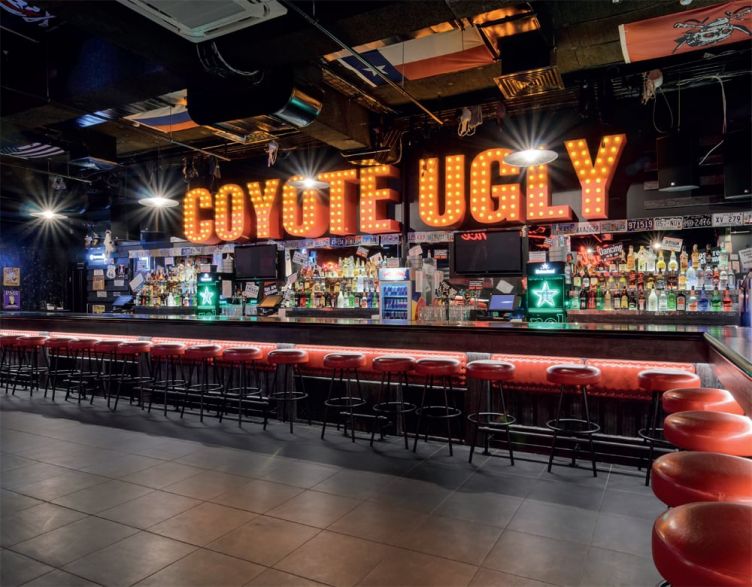 The Coyote Ugly legend began with a girl, a dream, and a little bit of Wild Turkey in New York City. In 1992, Liliana ‘Lil’ Lovell, a 24-year-old Wall Street apprentice-turned-bartender was doing a job she loved, earning money, and gaining notoriety for her antics on the bar as well as behind it. Tired of working for other people, she was ready to make her move. The plan was simple: open her own bar, turn a profit, and have fun doing it. Determined not to let anyone or anything get in her way, she drew up a business plan: beautiful girls + booze = money.

In 1993, the first Coyote Ugly Saloon opened in New York City’s East Village, with beautiful, larger than life personalities behind the bar that Lil affectionately named ‘Coyotes’. They not only poured drinks but danced on the bar, sang into the mic, told jokes, took shots with their customers, and created an experience not found in any other bar. Male patrons fell in love with the Coyotes, and females wanted to be them. The Coyote Ugly culture was born.

The huge success of Lil’s little New York bar started to gain a lot of attention both in the city and beyond. In 1997 one of her Coyotes, Elizabeth Gilbert (she went on to be the best selling author of Eat, Pray, Love), wrote an article that was featured in GQ magazine: ‘The Muse of Coyote Ugly’. The exposure caught the attention of Disney/Touchstone and the movie ‘Coyote Ugly’ was released in 2000, grossing over 113 million dollars – and launching the brand to a world-wide audience! Today, Coyote Ugly has 21 saloons open around the globe, with corporate owned locations in the USA and franchised locations in Russia, Ukraine, and Germany. The concept has plans to double that number in coming years with more USA corporate locations and expansion into more non-US markets with franchise partners in key countries.

#### A powerful machine
With a support and training system created from more than 20 years of experience and managing over 20 saloons world-wide, the successful expansion of this monster of a brand is a certainty. Fuelled by recent locations, the recognition of a blockbuster movie, three seasons of a reality show on MTV’s Country Music Television, and many features in magazines such as Inc. Playboy, Maxim, GQ and more, Coyote Ugly is sure to attract the right partners to take advantage of the brand’s strength. An international franchise programme is offered for selected candidates in non-US territories full of fun, support, high profits, and recognition of one of the world’s best known brands

Led by owner, founder, and original Coyote Lil Lovell, Coyote Ugly has a well-oiled machine for a system – and 22 years after its conception, the brand has never been stronger. The concept has a unique offering, able to provide systems and methods of running the world-famous brand – but also the flexibility to adapt to local cultures and traditions. The robust training and operations system includes full training of owners, managers, and staff; assistance with site selection and procurement; store design; brand and marketing guidance; and unrivaled ongoing support. Franchisees who are hands on, have a deep understanding of their local market and commit to follow Coyote Ugly’s franchise system are those who are most likely to become key players in the bar and nightclub retail sector.

### Support system
The total investment in a Coyote Ugly Saloon franchise is between £315,000-£790,000, dependent on location and size. Single and multiunit franchise partnerships are available throughout the UK, Ireland and globally. Single sites carry a franchisee fee of £39,500, while multi-store investors can expect to pay a fee of £79,000 for the rights to open up to three units. Coyote Ugly is seeking to recruit the right partners to expand the brand, and people who wish to benefit from the history of a world-wide legend in the industry and tested business model.

Of course, stepping into a new business venture is not without its risks and investors can be full of fear. With such a highly recognised brand, however, plus support of the system to get you up and running quickly and effectively, you can start making money quickly in comparison to most concepts. Since the process of starting a new Saloon has been done time and time again, all you have to do as a franchisee is follow the recipe for success, which includes a marketing campaign to generate interest and a buzz leading up to the Grand Opening.

The training and support programmes begin as soon as you become the newest member of our global franchise family. We start by developing the plan for your Saloon; building your marketing plan, and guiding you to find the perfect location. Coyote Ugly Saloons are typically found in large cities with a combination of heavy tourism and local patronage as well as small tourist destinations. Markets must have a large local and/or tourist transient population with disposable income, a drinking culture, and entertainment districts with other draws (bars, restaurants, sports etc.) – to which Coyote Ugly Saloons add the famous entertainment value with its vivacious, outrageous Coyotes, in addition to serving up the best drinks in town.

Owning a bar/nightclub is an exciting adventure. Being surrounded by and building success by offering a genuine opportunity for the community to have fun, meeting celebrities, and being the talk of the town offers an experience not found in other industries. Pair those qualities with ownership of a world famous brand like Coyote Ugly… and you have a recipe to start living the good life!

“LED BY OWNER, FOUNDER, AND ORIGINAL COYOTE LIL LOVELL, COYOTE UGLY HAS A WELL-OILED MACHINE FOR A SYSTEM – AND 22 YEARS AFTER ITS CONCEPTION, THE BRAND HAS NEVER BEEN STRONGER”

### Let the fun times start!
Think you may have what it takes to own the Most Famous Bar on the Planet? Do you want access to the knowledge, systems, and leadership of the world leader in the bar-nightclub industry? Could you be a part of the upcoming aggressive expansion of the Coyote Ugly Saloon Brand? To talk about the details and see if you are a good match, visit the website at www.coyoteuglyfranchise.com, www.tinyurl.com/GF-coyoteugly and request information from Justin Livingston, Vice President of Global Development at justin@coyoteuglysaloon.com.