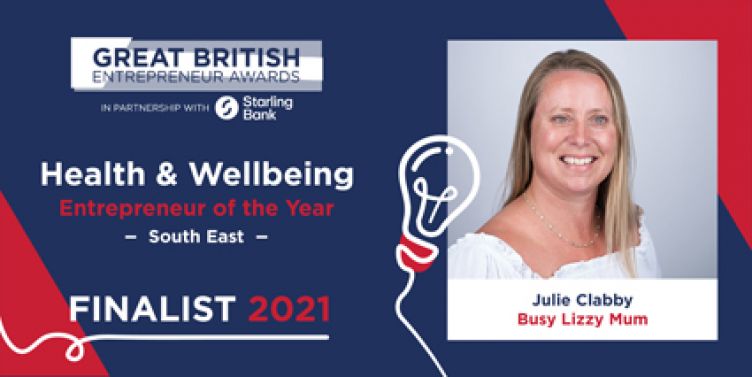 Regional finalists will be announced in September

Founder Julie Clabby has been recognised in the Health & Wellbeing category for the creation of the Busylizzy concept in 2011, subsequent franchising of the brand in 2014, and ongoing success across the South East.

The Great British Entrepreneur team received a record 4,800 entries this year across the eight regions, so it has never been tougher to make it to the shortlist.

The Busylizzy concept was born from Julie’s own maternity leave experience, where she saw a gap in the market for decent fitness provision for mothers.

She explains: “If they are unable to access a gym with a crèche or rely on family and friends to look after little ones while they exercise, what can they do? Bringing their baby with them to tailored postnatal fitness classes is the answer.”

So Busylizzy’s roots lie firmly in the physical and mental wellbeing of mums. And it now encompasses mothers to be with its pregnancy class provision to keep pregnant ladies fit and active during pregnancy, prepare them for childbirth and connect them with a network of other mums to be in their area.

Julie also sought to bring mum and baby class provisions into the twenty-first century and lessen the culture shock of maternity leave for many of the high flying career women taking time out to look after little ones. No more tea out of plastic cups in dusty old village halls once a week. She introduced a modern gym membership model and ethos to exercise sessions for mothers as well as baby classes in nice venues, professional instructors and the flexibility to attend a range of classes to suit changing diaries.

“Just because you’re on maternity leave, doesn’t mean you don’t have other commitments!” says Julie.

So with mums’ health and wellbeing as its cornerstone, the Busylizzy franchise platform has also been built around working mums and the increasing desire to create a flexible work-life balance around a career, babies, nursery and school. All Busylizzy franchisees are mums, and many have had second or third babies while also running their businesses.

The franchise network works within web-based systems and on flexible terms. The legwork of booking people in and out of sessions is taken care of by a flexible app-based booking system, meaning members are in control of the classes they attend.

Franchise owners can log in and work when it suits them so they can organise their business when little ones are napping, at school or in the evenings – it’s all about working smart and in a way that works around family life.

Start your own Busylizzy franchise

Send a free enquiry to Busylizzy for further information!