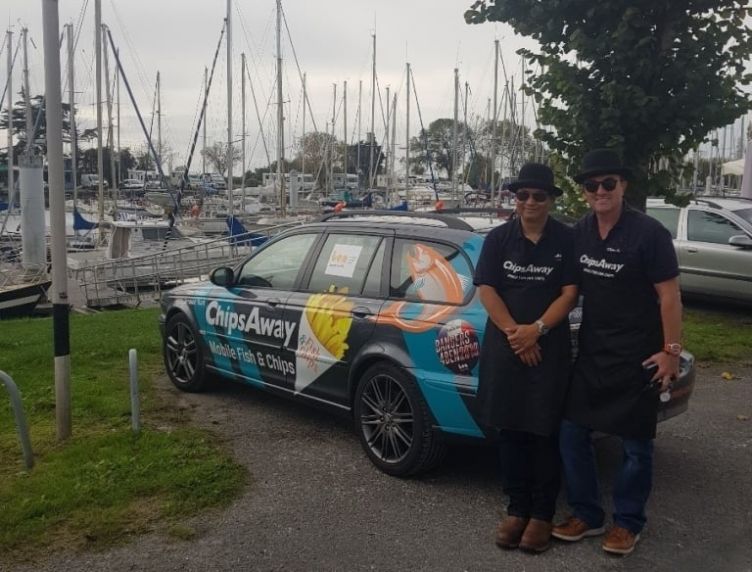 1,500 miles, numerous bags of fish and chips crisps, and possibly a few glasses of ‘Vin rouge’ later, the ChipsAway Bangers4Ben rally team returned home safely from the intrepid travels across France. Now the car has been sold at auction, with all proceeds going towards BEN. ChipsAway confirmed that £1,070 was raised overall.

ChipsAway specialists Steve Perkins and Terrance Thant completed the rally in their ‘Mobile Fish and Chips’ themed Jaguar along French roads without any issues, although the car has done over 150,000 miles and is around 15 years old.

Perkins said about the trip: “As Bangers4Ben newbies, we were made to feel instantly at home on the rally, amongst seasoned veterans and fellow newbies, alike. It was filled with abundant laughter, cheeky banter and large dollops of French hospitality! An immensely fun and well-run event, which raises significant funds for the incredibly worthy cause, championed by the charity BEN. We felt truly honoured to be representing ChipsAway and to be part of the motor industry world, having both come from such polar opposite previous careers.”

ChipsAway managing director, Tim Harris, also thanked the franchise’s kind supporters. “We couldn’t have done this without the help of some of our very generous suppliers, including; Octoral – who donated the paint for the full respray that was undertaken, ICB, The Van Hubb, Automotive Training Solutions and Grovenet. We’re so pleased to have reached and surpassed our £1,000 target, but if anyone would still like to donate towards this extremely worthy cause, I urge you to please visit our fundraising page. We really appreciate any support you can give!”

Start your own Kidslingo franchise

Send a free enquiry to Kidslingo for further information!