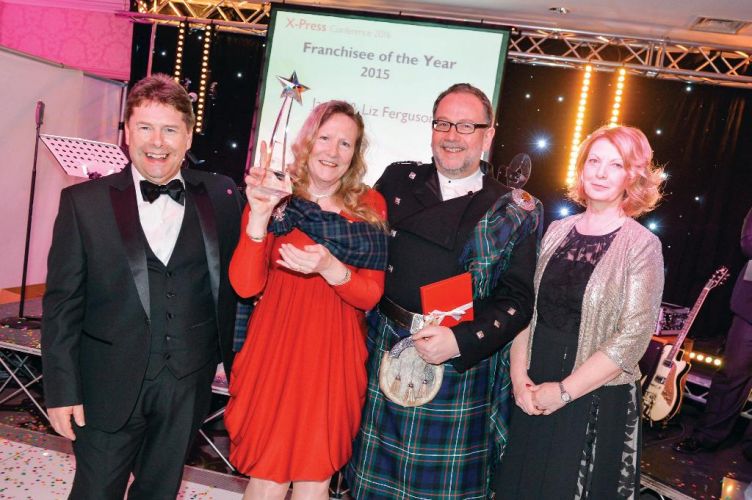 In X-Press Legal Services, over half the network are women, of whom two thirds have received awards in recognition of their achievements

Women are continuing to make their mark in franchising. According to the latest available research, almost a quarter of franchised businesses are led by women.

In X-Press Legal Services, over half the network are women, of whom two thirds have received awards in recognition of their achievements. In addition, two of X-Press’ three most successful franchisees are women.

Interestingly, one of the things that stops many people, especially women, from starting their own businesses, however much they want to, is lack of confidence. But comprehensive training and ongoing support from a franchise can transform cautious people from a wide variety of different backgrounds into confident, dynamic business owners.

New franchisees are encouraged by the rapid progress they make during training and confidence grows as their competence levels rise. It’s generally held that anyone can be successful, so long as they are hardworking, determined to succeed and follow the franchisor’s system.

People like franchising for many different reasons. For some, it’s simply to have a successful business - but with a little help. Or to make a fresh start, perhaps moving house at the same time.

For others, it’s the chance to work with a spouse or other family member. Then there are people who want the flexibility franchising offers; for example, those with young families or other domestic commitments.

Another big attraction for many is the opportunity to work from home because of the flexibility it offers - work can be fitted around family activities or at unusual times that suit any domestic situation. Over a third of all franchises - 44,000 last year - are run from home.

When Karen Underwood joined X-Press 10 years ago, she had two small boys and was used to juggling her time, so working from home was ideal.

She says: “I appreciate being able to choose when I work in the office, thanks to reliable staff. Being a franchisee allows me to balance the two important priorities of being a business woman and a mum.”

“I’m pleased to say winning the award greatly impressed my teenage sons, who found it hard to believe their mum could be so competent,” Karen says.

Sandy Hennessey has a different type of family commitment, but her need for flexibility is just as great as a working mum. She helps take care of her elderly mother, so values the ability to vary her hours and fit in with her three staff.

She says: “I enjoy what I do and would never want to go back to being employed again. I also value the flexibility being a franchisee gives me, so that I can take care of my family commitments.”

Current franchisees of the year, Liz Ferguson and husband James, wanted to work together and left the crowded south east for Looe in Cornwall.

Liz says: “We were pleased to have found a franchise with so much potential and one in which we could work together, with plenty of promise for the future.”

It was Liz’s brainwave last year to start a networking group that enabled their business to soar. Investment in time, effort and money has been well rewarded by their impressive growth.

Now X-Press is looking for new franchisees. The franchise welcomes interest from ambitious, hardworking, energetic and determined people, both female and male. Attitude, ability and aptitude are far more important than previous experience or qualifications.

Women’s skills and talents make them especially suited to franchising. They work hard and can be both captain and crew, leaders and team players, frequently combining a range of domestic and familial duties with their business responsibilities. They have an innate ability to ensure all the plates keep spinning, so that everything runs smoothly and everyone is kept happy.

Linda Mannion is an experienced plate spinner, having overcome extreme difficulties and still managed to double the size of her business. She has twice received the Franchisee of the Year award and been nominated for all categories of the franchisor’s awards in the 10 years since she joined X-Press.

She never expected to run her own business, nor that it would grow so quickly, but says she is naturally delighted it has.

Linda adds: “X-Press has always provided tremendous support and I feel secure knowing the safety net is there if I need it.”

Franchisee Jo French always wanted her own business. She was hesitant about leaving a well paid job, but after much deliberation decided to resign. She likes being her own boss and values being able to manage her work so she has time for activities outside work. She loves to sing and every day walks her dogs, cycles and goes to the gym.

People joke about women being able to multitask, but many believe it’s hard-wired into the female brain.

Women’s can-do attitude enables them to be focused and to overcome obstacles and difficulties in order to achieve goals, without neglecting other responsibilities.

All franchises must be regarded as serious businesses, whether run from home or dedicated premises. They must always create a good impression, look professional, operate to high standards and offer exemplary customer care at all times.

They were keen to work together and were delighted to discover the X-Press area they wanted was available, so they didn’t have to move. Now they rent an office not far from home and employ two people as well.

“I enjoy the work very much and the longer and more complicated the search, the better I like it,” Helena says.

Penny Brierley is one of X-Press’ top performing franchisees and has won 10 awards over the last 11 years. Ironically, before she joined the franchise she only wanted a “little part-time job” to fit in with the family. Now she employs 15 people, including her husband.

Her recipe for success is to follow the system. She says: “You need an excellent relationship with your franchisor and X-Press has always provided first class support.

“We enjoy what we do and have no regrets - this is the best thing we ever did. We would recommend it to anyone, but with the proviso that, like everything else worthwhile in life, it’s all down to you and the effort you put in.

“We believe we could not have grown so fast if we had tried to start this ourselves. It would have taken many more years to achieve so much on our own.”

Start your own Funding Nav franchise

Send a free enquiry to Funding Nav for further information!