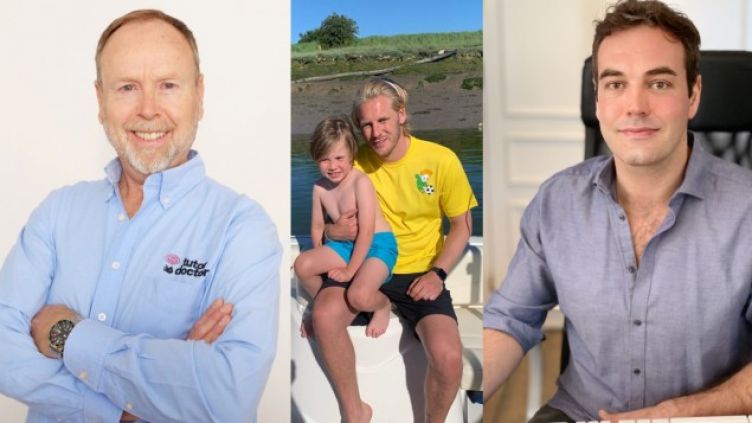 Dads detail the niche skillset they bring to the franchise industry

It may come as no surprise that there is often the misconception that franchising – specifically lifestyle franchises – is most suited to stay-at-home mums looking to make a supplementary income once the kids start school. Three dads in franchising prove that this is far from the truth – franchising not only offers a viable income revenue with the potential to support an entire family but also allows for these fathers to build their schedule around the needs of their children. And, in some cases – as you’ll find out below - franchising can fulfil a need for a service or product inspired by our own children!

Recognising the advantages
When Julian Field launched his Tutor Doctor franchise in York in 2017, there were many factors behind his decision. Along with the passion for supporting children, recognising the power of lifelong learning and his own experience of tuition influencing his decision, it was also his children’s journeys that steered him towards the tuition franchise.

“When I was in high school, I struggled with maths,” said Julian. “So, my parents hired a tutor to help me out. On reflection, this helped me massively, not just with completing my two degrees, but I went on to become a maths and physics tutor myself. That’s the reason why Tutor Doctor resonated with me so much – I know first-hand the impact a personal tutor can have on a student. Equipping children with those possibilities makes it all worth it.

“Throughout my career, I was certain that I would return to education one way or another. But, as is the case for many people, life got in the way. With a clear head and the chance to fulfil my ambition, I sought out my next opportunity. I had moved to York, married my wife Clare and started a family. I wanted a business opportunity that would fit around that, whilst also providing the professional satisfaction I was seeking.”

Four years later and Julian’s business is a buzzing empire. Although the COVID-19 pandemic had an impact on their usual in-person service, parents soon learnt the benefits of online tuition for their children.

“We currently support over 70 students with their learning at one of the most crucial times in their academic career. And it’s not always school students who require our help. For example, we’ve helped a woman in her 70s to learn the keyboard, whilst another also in that age bracket required support with a family history project they were conducting.

“Although my own children have now left home, they have both worked as tutors themselves as they have journeyed through university and into their careers,” said Julian.

Taking control of your work-life balance
Alex Trippier first heard about Monkey Music when he took his eldest child to her music classes in 2008. Having taken his daughter to numerous other baby activities, he instantly recognised the value of the bespoke curricula and it was evident that the lesson plans were more structured with a variety of songs and activities for the children to engage with and aid their development. The teachers were inspiring and ran their classes with passion.

Music has played a pivotal and important role in the Trippier family, with all three children having attended Monkey Music classes from babies through to toddlers and now Alex and his wife, Eloise, are franchise owners of three territories across North London.

“Seeing how my children developed their social skills and boosted their self-confidence through music massively influenced my decision to invest in a Monkey Music franchise,” said Alex. “My background in teaching and acting was a perfect fit to become a teacher, as well as run the franchise with Eloise. From the outset, our roles were very defined – Eloise runs the office and I head up our team of four talented teachers.

“I’ve always enjoyed working with children, so when the franchise came up for sale it seemed the most obvious thing to do, particularly as we were both looking for a new challenge in our lives following many years in television and the theatre. Being able to run our own business suits us and we’ve been able to build a schedule around the needs of our children. We’ve structured the business so that all the classes take place during the week, which then allows me to take the children to their after-school activities, as well as freeing up the weekends to spend with the family – a priority for me!”

Kickstarting a great idea
Having launched a franchise to fulfil his son Fletcher’s passion for football, Rich Elms is now the franchisor and founder of BabyBallers - a multi-skills football franchise – which offers football and sporting development activities to children between the ages of 16 months to five years. Since its launch five years ago, BabyBallers has over 50 clubs in the UK, has expanded to Belgium and is soon to launch in Australia.

“I originally took Fletcher to football classes because I wanted to give him a head start in life - both in sport and social development. But after attending the first few sessions, I was slightly underwhelmed and decided I could do it better,” explained Rich.

“I soon set up my own club in Essex for Fletcher and his friends. My aim was to help them develop fundamental movements, confidence, cognitive ability and a basic understanding of colours, numbers, shapes and, of course, football skills. The classes became popular very quickly, with demand growing exponentially. It’s amazing - I’ve seen over 1,000 kids go through my clubs I first started near our home.”

The classes are a popular activity for dads and mums who spend quality time with their kids whilst making new friends. Rich has just sold his last club to concentrate on supporting the growing network of franchisees alongside the head office team. Until recently, Fletcher continued to come along to classes with his dad but now, at the tender age of seven, he’s signed a player’s contract with Southend Football Club.

“It was great to see Fletcher get a contract after taking part in BabyBallers for so long,” said Rich. “My main aim was always to give him and other kids a head start. Whether they want to join a football team or just play with friends, our fun and lively classes help children learn life skills through play.”

Whether you’re looking for a way to achieve a better work-life balance – and therefore spend more time with your family – are motivated to build a legacy for your children, or you’re inspired to create a new model based on their own interests, investment opportunities in franchising hold the potential to fulfil all that and more.