“It’s a clinic in a box. That’s what Laser Clinics provides you with” 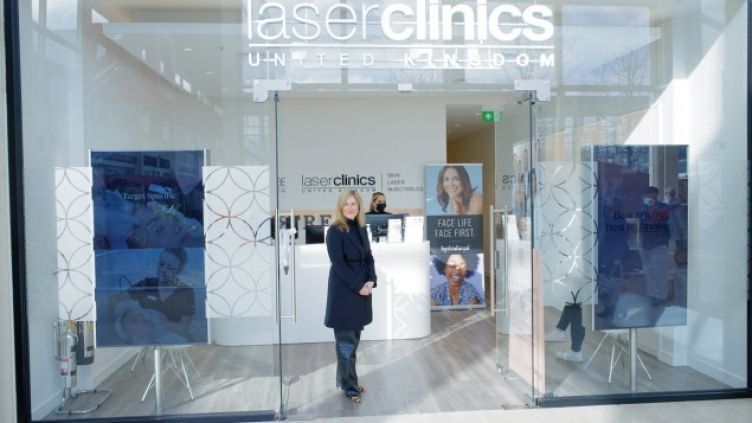 Anna Muskett is living proof that you can own and run a laser hair removal clinic – even with no experience of aesthetics – and turn it into a huge commercial success. And just in case anyone missed it the first time, she’s done it again.

Anna’s now the owner of two treatment centres in the Laser Clinics UK network - one in Luton and one in Milton Keynes - and they’re so successful she says she’d consider opening a third in years to come.

A coffee changed my life

It all started with a coffee. Anna sent an old colleague a LinkedIn message for her birthday, went for a coffee, and discovered the friend was bringing the Laser Clinics brand from Australia to the UK. “It turned my life around,” says Anna.

Asked if she fancied exploring the franchise, Anna said yes, and her life changed virtually overnight as she went from a senior IT career to the owner of a thriving beauty business!

“I’m very conscious about the way I look, and of ageing, and I like what we’re able to offer,” she says. “I’ve previously bought laser hair-removal services, I’ve had facials, I’ve had skin treatments and I’ve had cosmetic injectables, so to have the chance to work with a brand and be a part-owner of a treatment centre was an amazing opportunity and one I couldn’t turn down.

“It’s a clinic in a box. That’s what Laser Clinics provides you with. As long as you have the energy, the drive, the knowledge and the experience to run a business, run sales teams or handle accounts, you can make this work.”

So, how was it for her? “It was terrifying at first,” says Anna. “I’m happy to admit I didn’t have a clue. I’d worked in retail previously as a 15-year-old in a shoe shop, but that was the extent of it.

“Luckily I’m a quick learner and was able to build a fantastic team around me very quickly.

“Then Luton exploded. That’s all I can say. We just weren’t expecting it. We obviously hit the mark at absolutely the right time and provided a product that was needed. A lot of our clients used to go to London for their treatment and we told them we’d brought London to Luton. Our first clinic was incredible. In the third month, I thought ‘This is a replicable model. I have the energy, the drive and the enthusiasm, I’ve managed to build a great team and I wonder if I could do it again if I took some of them with me?’.”

Rather than just wonder about it, Anna did it. She opened her second clinic almost exactly 12 months after her first, in August 2021.

Anna says: “Six months in, Milton Keynes has gone brilliantly. We’re absolutely delighted with the client base we’ve been able to build and we’re not far behind Luton. That’s phenomenal, and a testament to the brand, the services and the offerings, as well as to my team and the exceptional customer service they deliver. That’s what differentiates us from the other providers. We’ve managed to grow mainly through word-of-mouth referrals. We started off with two therapists and now, 18 months later, we have a team of 25 between our two clinics.

“Luton blew my socks off. And that’s enabled me to invest. Our rooms are booked back-to-back in Luton, and here in Milton Keynes I have two laser rooms, also booked back-to-back, so I’m already looking at a third. My teams work as one. It really helps to have two clinics in close proximity because you can share therapists and we can borrow stock from the other clinic which keeps us operational.”

Nicknamed Mama Muskett by her staff who, like Anna herself, see themselves as part of a family, she is clearly excited by the constant innovation Laser Clinics is renowned for. “It gives us more lines to up-sell and cross-sell to our clients and we get more share-of-wallet, based on the services we provide,” Anna says. “It’s fantastic for the therapists, too. Never before have they worked for an organisation that invests so much time in them as well, increasing their skill set and knowledge and giving them more offerings that they can then become passionate about and take to market.”

And she has no regrets about becoming a 50-50 partner with Laser Clinics UK in her two treatment centres. “The model has proved itself. I work long hours, but the rewards are just amazing and I love the thrill of business, ” she says.

“Sales is a massive part of it. So is customer service. I’m amazed at how many transferable skills I had. But we don’t have to do the hard sell here because clients really want and need what we offer.”

Asked if she has any advice for anyone else considering following in her footsteps by becoming a Laser Clinics UK franchisee, Anna answers without hesitation: “Just do it. I didn’t know what I was walking into but look what I’ve managed to achieve.

“The support now is far greater than I had when I first worked with them. It’s a family. You’ll be supported. And if you want to run your own business, you’ll get a lot of autonomy and can put your own spin on it. I’ve done it twice now and been through the mill with both of the clinics, so there’s not much I haven’t had to deal with.

“I’m willing to talk to anybody. I’ll be straight with you and not put flowers on it. I’ll tell you exactly how it is.”