Close
Did you know?
Revive! is eligible for funding support! 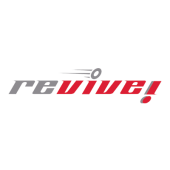 Revive! MD on a run with charity challenge

The best of the best: 2018 bfa HSBC Franchise Award winners