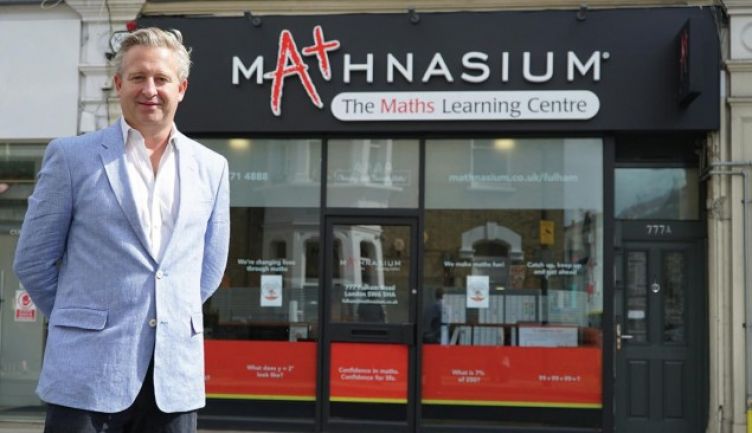 Undaunted by everything the pandemic could throw at his fledgling business, the owner of Mathnasium Fulham has already secured a territory for his second centre and plans to open another three.

Dan Tregoning’s optimism is backed up by years as a commercial property expert in the education sector - a talent that led him inadvertently to become a Mathnasium franchisee in the first place.

Dan says: “I was asked by Mathnasium to find sites for its centres, but when I began to investigate further I realised Mathnasium was something I was seriously interested in myself.

“The barriers to entry are low and the results coming out of the US were seriously impressive, as was Mathnasium’s growth plan for the UK.”

Dan ended up opening his own Mathnasium centre in London’s Fulham Road near Parsons Green tube station - an area he already knew well - and realised there was enough demand there for a maths tuition centre to work.

Unaware that a once-in-a-century pandemic was about to change the world, Dan opened his doors in January 2020 and had 25 students on his books before lockdowns forced him to close them again.

Despite one obstacle after another being put in his way by circumstances beyond his control, Dan built up the student roll to 90 by December and has more than 100 now.

“It’s been very topsy-turvy,” he laughs. “We haven’t had a very smooth run at it at all. But I haven’t stopped enjoying being a Mathnasium franchisee since day one.

“There’s a real sense of fulfilment in changing young people’s attitudes to maths and putting a smile on their face, even if they came here kicking and screaming on their first day.

“By day three they bounce into the centre and are enjoying it. It’s so much more rewarding than any job I’ve ever done - leaps and bounds ahead of them.”

But with pandemic restrictions and lockdowns making much of his progress two steps forward and one step back, does Dan have any regrets about signing up as a Mathnasium franchisee in the first place?

“Not for one moment,” he says emphatically. “It’s been a hell of a ride, but we’re definitely all the stronger for it.

“As a business, our eyes are probably wider open than they would have been and we’re certainly more resilient. It’s been really interesting.”

Dan discovered a real camaraderie among franchisees, who all found themselves in the same boat during the successive lockdowns and restrictions, and he praises the support they received from Mathnasium’s head office and its master franchisee, John Preston.

Dan advises those thinking of following in his footsteps to begin by choosing a location in a territory they already know very well, as he did himself.

“When we started out, my plan was to open five centres in five years, then see where we are.

“We’ve turned the corner and are making a profit. We’re ahead of where we should be in the business model - and that’s despite the downturn and the pandemic.

“We’re upbeat about the future now and excited about the second six months of the year. We’re hoping to get up to 180 students by then.”